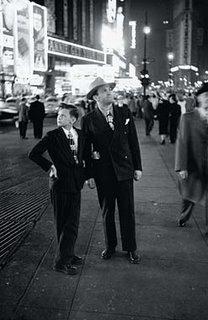 On my first day as a student at Brooklyn Technical High School, I was so frightened I couldn’t enter the building.

I was terrified by this huge, forbidding structure that looked like a state prison and seemed to be inhaling students off the streets by the hundreds. I was scared of the Fort Greene neighborhood, so different in every possible way from my little enclave in Bay Ridge.

My father had given me a lift in his car that morning and he quickly sensed my anxiety—there was no way to miss it. Instead of getting angry or shouting “Be a man!” and kicking me out of the moving car, he took me for a spin around the block.

As other students went inside, we cruised in the vicinity of this massive fortress like a four-wheeled sputnik orbiting a distant planet. My father told jokes and stories to calm me down while I gripped the armrest to keep from jumping out the window and running all the way home.

People who live in this up and coming area today wouldn't recognize the place it was in the seventies. There were burned out houses on every block, suspicious characters on every street corner and an amazing shortage of white people.

With my father's help, I finally calmed down, got out of the car and started my high school education. It was a long time ago, and I like to think I handle could things better now, but I’ve never forgotten those warm-up laps around Fort Greene Place in my father’s car.

My father turns 84 next month and he can’t drive anymore. He suffers from Alzheimer’s disease and has trouble sometimes remembering the names of his four children.

Last week I took him for his first day at an adult daycare center on 16th Avenue. He’s scheduled to go two days a week for about five hours each day and the Veteran’s Administration picks up the tab.

I was coming along with him in the center's van just this one time. The administrators made it clear that after the first day my father should come to the facility alone. Best to cut the strings, one told me.

I watched the staff sit my father down for a breakfast at a long table with other elderly people, many of whom were in much worse physical and mental condition than he is. They put a huge paper bib around his neck and gave him a plate of animal crackers and a bowl of oatmeal.

It made me angry to hear them speak to him in loud, elongated tones—HI, HOW ARE YOUUUU? Don’t talk to my father like that, I wanted to shout. He may have Alzheimer’s, he may be three-quarters deaf, but he’s not an idiot for God’s sake.

For once I kept my mouth shut. I knew these people meant well and my father seemed to be enjoying himself; he even offered me one of his animal crackers.

It seemed strange that I was being so protective of my father, given our often turbulent history. We've had such screaming matches over the years, even got physical on a few occasions, and I've lost count how many times I swore that I'd never speak to him again. It's amazing how fast all that hostility can vanish.

I said goodbye to my father and got as far as the hallway before bursting into tears. I felt like a rat for leaving him in this strange place with these sick, old people. He belongs in his house, with me, not here, in this adult playpen.

“I remember when he used to carry me on his shoulders,” I said to his nurse while wiping my eyes.

But I believed this would be good for him. Ever since my mother died he pretty much sleeps around the house all day. At least for two days a week, he can socialize with people his own age.

I wasn't leaving him, as my therapist later explained; he was leaving me. Age and dementia were taking him away from me like a slow moving train disappearing down the tracks.

Maybe my father felt the same kind of pain when he watched me walk through the doors of Brooklyn Tech so many years ago. It might have hurt, but he knew I had to do it on my own. It was best to cut the strings.

I caught the N train home and while we rattled toward 59th Street, I looked at the graffiti smeared all over the walls and pillars surrounding the elevated tracks. There was the usual kaleidoscope of sprayed painted names and numbers covering nearly every inch of concrete.

But one tag caught my eye. It was a simple phrase written in rapidly fading black paint that read “We bleed.”

Yes, we do, I thought as the train entered the tunnel. We bleed and try to keep going.
Posted by Rob K at 8:31 AM