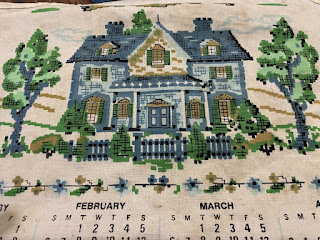 So, what was I doing in 1994? The question came to mind the other night while I was washing the dishes. I noticed that the towel I was using to dry off the plates and silverware was an old cloth calendar that had once hung in the kitchen at my parents’ house. That year caught my eye. I couldn’t believe this thing in my hands had survived nearly four decades. The calendar bears the image of a house with a picket fence and trees on either side. Near the top there are a pair of roosters crowing on either side of a scroll bearing the Kitchen Prayer. “ Lord, warm all the kitchen with thy love ,” it reads, “ and light it with thy peace. Forgive me all my worry and make my grumbling cease. ” I’m particularly fond of that last line since it would pretty much take an act of God to get me to cease my grumbling. There’s little doubt that my mother had picked out this calendar. She had fondness for colonial theme décor and these cloth calendars fit in much better than any of the fr
Post a Comment
Read more 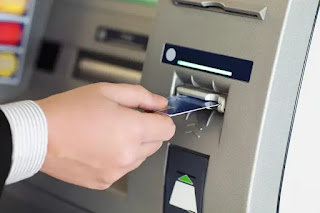 A week ago, I had some hope. I can be a bit cynical—some might even say “hostile”—if I don’t keep a close watch on these thoughts of mine. People can get on my nerves rather quickly—if I allow them to--but every so often something happens that almost restores my faith in humanity. Last week, I went to my bank’s branch on 86th Street and 5th Avenue after the gym and found the ATMs had been taken offline. This sucked monkey balls. I had planned on doing some shopping at a fruit store one block away and I wasn’t sure if I had enough cash in my wallet. Some of the local businesses strongly prefer cash over plastic. As I was leaving, a man approached me and began speaking in Spanish, obviously looking to get some money as well. I did my best to explain the branch was out of the commission and pointed to a sign indicating the next one was 11 blocks away. It took a little effort, but he eventually got the idea. As I started to walk away when he called out to me. I thoug
4 comments
Read more 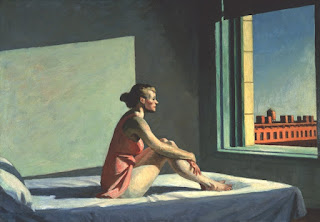 Whenever I griped about my various jobs, Fred the Shrink had a great response. “It funds your passion,” he’d say. Fred knew that I really wanted to write fiction for a living, but he also knew—much better than I did—that writing professionally is a tough gig and that many writers have some kind of day job to keep them solvent. Fred’s encouragement helped me get through some tough employment times, which thank God, have gotten markedly better in recent years. And I thought of him this weekend when I went to the Edward Hopper exhibit at the Whitney Museum. Born in 1882, Edward Hopper was an American realist painter and printmaker who had an incredible gift from finding drama in the commonplace subjects. He’s perhaps best known for his 1942 painting Nighthawks , which portrays four people in a downtown diner later at night, as seen from a distance through the diner’s window. These people seem so lonely and isolated, but Hopper himself said that he didn’t see Nighthawks as par
4 comments
Read more 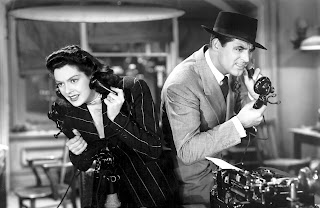 The Happy Hour, yes, of course. How could I have possibly forgotten the name of the tavern that was pretty much my second home some thirty-odd years ago? Well, I’ve been forgetting a lot of things lately, so perhaps we shouldn’t ask that question. The important thing is that I met up this weekend with a bunch of my co-workers from the Pocono Record, where I worked from 1988 to 1992. We had our grand reunion in the Philadelphia suburb of Swarthmore. Naturally, I was a nervous wreck in the days leading up to Saturday. I was positive I had gotten my hotel reservation wrong; then convinced I had gotten the date of my bus ticket wrong; and then drop dead certain that I would get lost in Philly and not be able to find the commuter train that would take me out to this lovely college town. Do I really have to tell you that none of these things happened, and that I can find things to worry about like a truffle hog on a fungi hunt? No, I didn't think so. Anyway, I
4 comments
Read more 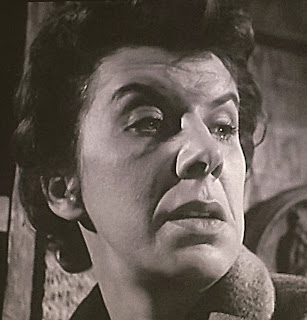 The scene begins with a woman facing the wall of a crumbling shack and humming tunnessly. This is from an episode of Peter Gunn , a classic detective show, entitled “Spell of Murder” and it put quite a spell on me. Created by Blake Edwards, Peter Gunn ran from 1958 to 1961, and starred Craig Stevens as the eponymous hero; Lola Albright as Edie Hart, a nightclub singer and Gunn’s girlfriend, and Herschel Bernardi as the perpetually exasperated Lt. Jacobi. The show also featured some excellent filmmaking, appearances by some of the biggest names in jazz at the time, and a slew of fine character actors, as well as appearances by such future stars as James Coburn. Mary Gregory played the woman in the shack. Over the course of her career, she appeared in such films as They Shoot Horses, Don’t They and Sleeper , as well as reoccurring roles in LA Law and Knots Landing . However, it’s her single scene in “Spell of Murder” that sticks out in my mind. She only has three minut
4 comments
Read more 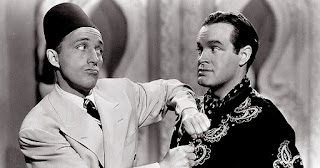 And he looked like such a nice guy. David Owen sent me a friend request on Facebook last week. I didn’t recognize the name, so I clicked on to his profile to see if we had any friends in common. We didn’t. I wasn’t sure how he had gotten my name, but I’ve made a few random friends on Facebook in the past. I might make a new friend—and God knows I could use them. His profile described him as an elderly widower who lived in New Orleans. He seemed harmless. How could I turn someone like that down? If I ever go to New Orleans, I thought, I could look David up and he could show me the sites. There’s nothing like getting a tour of a strange city from a local. And if David should decide to visit New York, I’d be more than happy to show him around town. Now at about this point you’re probably hopping up and down in front of your computer screaming “ Schmuck, what’s the hell is the matter with you? It’s a scam! ” And rightfully so. I only wish you had been there
6 comments
Read more 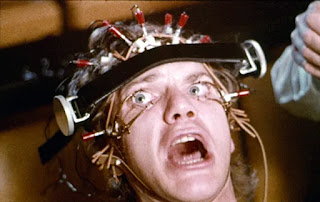 They called it “The Ludovico Technique.” There’s a scene in A Clockwork Orange , Stanely Kubrick’s 1971 film about a dystopian society, where Alex, a sadistic gang leader portrayed by Malcolm McDowell, undergoes aversion therapy to cure him of his violent ways. Alex’s head is strapped down so he can’t turn away and his eyes are pried open with clamps, so he has no choice to look at films portraying murder, torture and rape. It’s a harrowing scene and I could never imagine subjecting a fellow human being to that kind of abuse for any reason. But that was before I started reading Kimberly Garcia’s Twitter feed and now, I’m not so sure. Kimberly Garcia is the mother of Amerie Jo Garza, one of the 19 children killed—along with two teachers—who were murdered in the mass shooting at Robb Elementary School in Udavle, Tex. on May 24. The tweets are excruciating. There is no filter, no commentator sanitizing this woman's agony. Her unimaginable suffering is torn right out of h
2 comments
Read more
More posts

Rob K
Born in Brooklyn in the same year the Dodgers moved out. I love movies and want to make them. And, of course, I've written a novel...